on August 25, 2013
I've been redoing my kitchen for a few weeks. It's been fun and I haven't done anything overly expensive. I think painting was the most expensive part, just because I never seem to have enough painter's tape. It's not completely done just because I ran out of the special screws I need for my Ikea hardware (the screws they came with are much too short to fit through my thick drawers and cabinets) and four drawers still have the old hardware. I plan to go buy more screws but I haven't gotten around to it yet.

I went with a turquoise to match the artwork I bought from FamilyTreeDesign.net and to go with all the red appliances we already had. I'd been eyeing those monster prints forever and I finally had a little extra money so I went for it. I love the way it all ended up matching up. 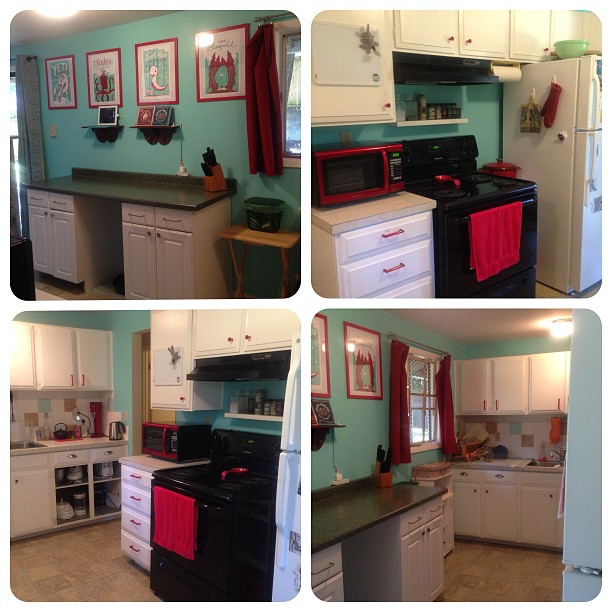 Ignore the baby gate in the window; we have to keep the cats from popping the screen out and escaping. 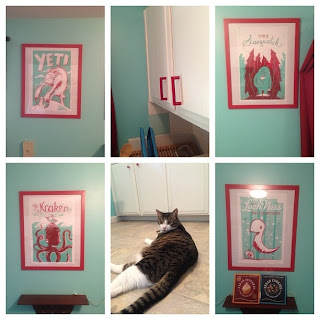 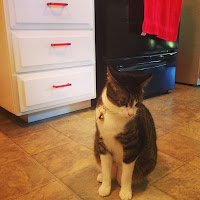 Here we see some pictures of the artwork, the new Ikea knobs, and the cat who never helps. 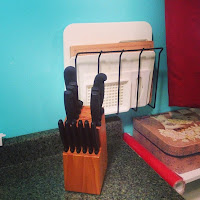 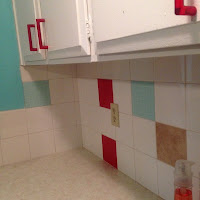 I stole a trick from Pinterest (who hasn't these days?) and bought a $12 magazine rack from Amazon to store my cutting boards right behind the knives. The second picture is an in progress shot from when I got rid of the brown tiles behind the sink. I didn't have the money to actually replace the tiles and sanding/repainting seemed like way too much work. Sooo, I went to Amazon looking for a solution. I somehow stumbled on vinyl craft... sheets of some sort.

They're billed as permanent and you're supposed to cut them out into letters for signs, but I just sliced them down to the size of the tiles and stuck them on. It's been over a month now and they still look great and haven't peeled at all. The vinyl actually matches the sheen of the real tiles quite well, too, so it looks legitimate. Not bad for $10. (The turquoise squares are just wash sheets that I stuck on as a tester and ended up leaving. They're holding up well, too and I've peeled them and moved them a few times!)

My last craft item is something I saw on Etsy and knew I could make on my own, since I love working with clay. I've had the same pack of Sculpey for over a decade. I honestly have no idea how it hasn't dried up or grown mold, since it's not sealed or anything. It just sits in a cardboard box on a shelf. I pulled out some of the colored clay and got to work.

Initially I was going to try to recreate the tentacle plant I saw on Etsy pretty faithfully, but then I remembered I'm lazy. Instead of going to look for the right colors of clay, some actual terracotta pots, and moss I just went to Target. I found the little bucket in the dollar section, and the moss was a vase filler on clearance for $1.50. It came with some ugly paper eggs and a bunch of twigs, but I just threw those away. I cut up a plastic cup and stuck it upside down in the bucket. The tentacles got hot glued to the cup to keep them from falling over and I just jammed the moss in around them.

Overall the tentacles took me about thirty minutes each because of all the little suckers I put on. It was absolutely worth the time. 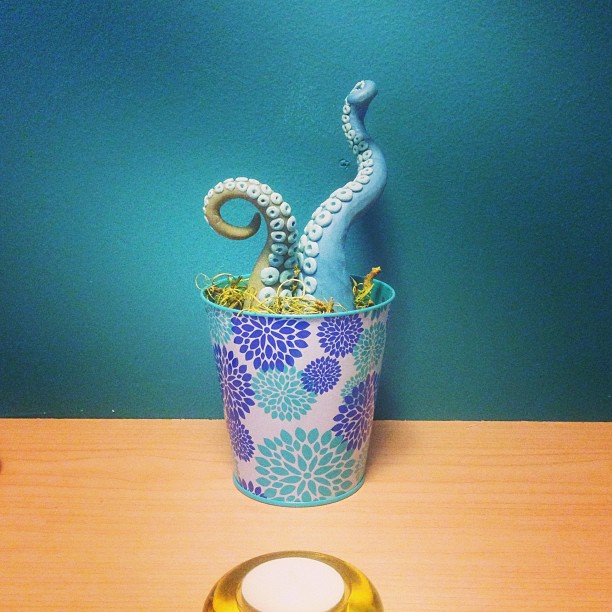 It's so damn cute! Of course as soon as I set it down, The Cat Who Never Helps showed up and and tried to eat the fake moss. I had to put the thing up on a shelf to keep him from giving himself brain damage, and he spent some time admiring it from afar. 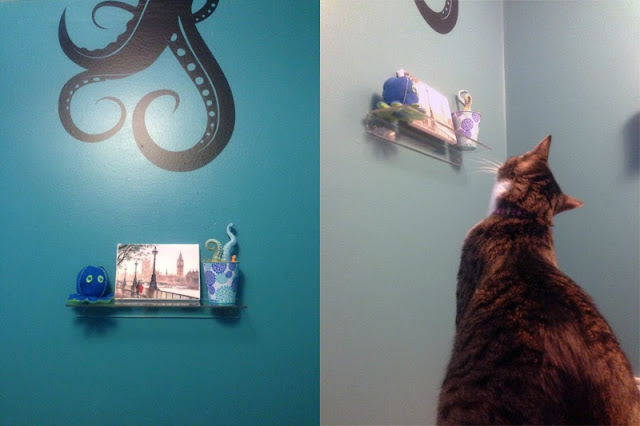 (The first picture is accurately colored; the second one suffers from bad lighting.)