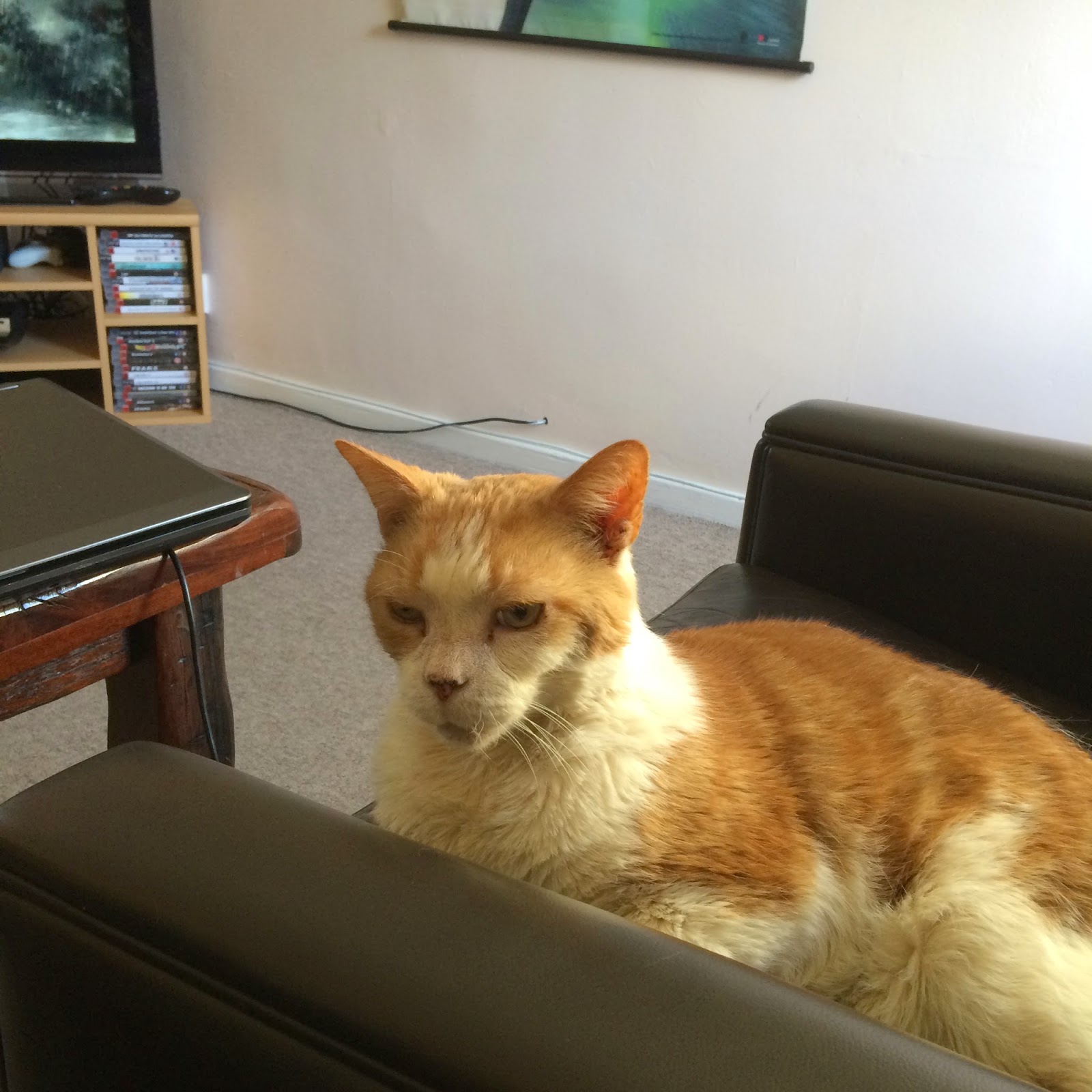 Part three in my popular interview series is one I've been looking forward to since I decided to interview cats for the blog.

This is Fergus.  Or, as he's affectionately known by me, British Martin. They look pretty similar, though Martin has some more pudge on him and Fergus drools enough for a whole colony of feral cats.

Fergus is all I could want in a cat. He's ginger, he's grumpy, he's grizzled. He lives with a fellow author, Naomi Clark. She wrote one of my favorite books out there, a noir thriller called Undertow. If you like hard-living, hard-swearing protagonists who can't catch a break and have a demon living in their heads, definitely check it out!

I was able to Skype in with Fergus recently and really get to the heart of what makes him tick.


O.R.B: Fergus, there are many issues in the world today that need our attention. From human trafficking to hunger and despair in lower income areas, we're encouraged by the media and society at large to really consider how our actions have an impact on the world. What are your favorite snacks?

Fergus: I like tuna mayonnaise. It's tuna but with mayonnaise, which I think is quite innovative. Sometimes the bearded human makes it and lets me lick out the bowl. Sometimes someone knocks over the bin to get the leftovers, but I don't know much about that. The cottage could be haunted, I suppose? That's probably it. My favourite human says it's definitely not my fault, anyway, and I tend to agree with her.

O.R.B: Fascinating. I've never been to a haunted cottage before, but I admire your bravery in dealing with a possible poltergeist infestation. Let's move on, shall we? Evolution is still, in this day of advanced computers and bionic limbs, a hot-button issue. People all over the world debate its validity and its role in human history. Evidence is ignored or argued, and hypotheses are challenged. Why have you remained so staunchly anti-social media?

Fergus: I find social media invasive and it encourages people to share pictures of food that I'm not eating, which creates a community of haves and have-nots. I don't want to see food that isn't in my bowl. That's my right.

O.R.B: I couldn't agree more, and I definitely see where you're coming from. Perhaps we should all be more careful in what we're putting out there for the world to see. On that same note, I must ask: Conspiracy theorists suggest that many events in world history may not have happened exactly as media or the writers of said history have indicated. From alien abductions to the suppression of the electric car, speculation runs rampant among people seeking to uncover truths and seek out justice. Describe a big problem in your life and how you've coped with it.

Fergus: Once I got in a fight and had to have my leg in a cast and I wasn't allowed outside for A WHOLE WEEK and they shut me in the dining room where I couldn't even see outside, so I banged my cast against the door and the tables until they gave me extra biscuits to distract me. Also once someone knocked over the bin and coincidentally there were monkfish leftovers in there, which was a problem maybe? So I ate them and it was fine.

There you have it, folks. What makes Fergus tick is tuna with mayonnaise and leftover monkfish. Don't expect to see him tweeting any time soon but if you'd like to keep up with his adventures in avoiding the living room because he's scared of the couch, follow Naomi on twitter: @Naomi_Jay
animals cats ginger tabbies interviews