I really love Halloween and will one day host a great party where people can show up in costume and we eat spooky food and have Monster Mash (the one by Bobby "Boris" Pickett! No substitutions!) playing in the background. Probably not on a loop, but people don't notice music at parties if it's not really loud, so maybe!

I've got a Pinterest board full of spooky pictures and ideas and I've curated (that's fancy for "grabbed some and slapped them here) some pins that I think would make for a great party. This week will be party post week, woo! 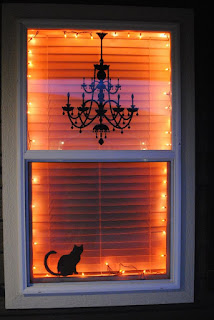 Before people even come into the house, they should be thinking HALLOWEEN PARTY! Since mind control hasn't been invented yet (that we know of!) we've got to get the idea into their heads in a less invasive manner. Making the outside of your house look festive is a must.

Ring your window with orange mini-lights and cut out or buy some silhouettes to put up against the backdrop of curtains or blinds. If you're like me, you don't need to use a cat cut-out because you have a lot of cats in the window already.

There are a number of Halloweeny shapes that would look obvious in outline only, too: cats, pumpkins, bats, a witch's hat--though if you have dumb friends they might ask what a traffic cone has to do with Halloween. If that happens, pay close attention to the upcoming fantasy party cocktail post because you'll probably need to imbibe copious amounts of booze to deal with your stupid friends. Why did you even invite them in the first place? 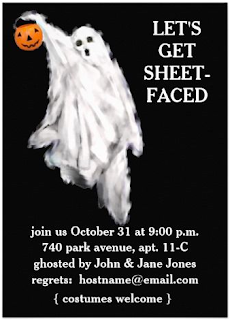 Speaking of invites, I like a good pun (and a bad one, I'm not picky) and I almost forget we need to send some. Otherwise, how will our friends know to show up? You know, because we're still missing out on mind control. (I googled; it doesn't seem to have been invented in the two minutes since I first mentioned it.)

This invite would be easy enough to make yourself if you're poor or cheap or just don't like to support other people in their artsy endeavors. You could grab some ghost pictures off the web, type up your cheeky suggestion that your guests come over to get "sheet-faced," and just hope you don't discover some of your friends are in the KKK.

That would be super awkward. 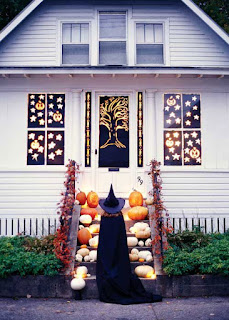 Using the same principles as the previous window idea, if you're concerned people might try to see inside and get really jealous of your hep hip and happenin' party and maybe start smashing pumpkins or just a Smashing Pumpkins cover band, you can do something like this!

I'm not sure where to find large sheets of black paper, but teachers always seemed to have giant rolls of paper when I was kid, so I know they exist somewhere. All you need are some easy to cut out stencils (maybe trace Halloween cookie cutters!), some scissors, an exacto knife, or a sharp-billed bird if you're Wilma Flintstone. Then, you've got yourself nearly blacked out windows that no one can see in through!

Or out of. *spooky music plays* 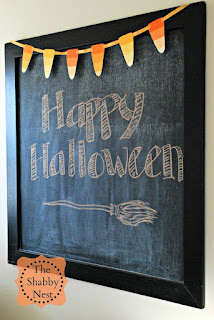 I've yet to get up the courage to stroll brazenly into a hardware or paint store and just grab handfuls of paint chips, stuffing them in great sacks and hauling them out the front door like a neanderthal dragging her conquered mate back to a cave, but I'm apparently the only cowardly person on Pinterest.

Paint chip decoration ideas are all the rage. Most of them seem pretty lame to me, but I do like this idea of cutting paint chips into the shape of candy corns and making a little banner out of them. Maybe one of these days I'll don a hat, giant sunglasses (like, super giant; comically oversized to the point of being too heavy for my face), a trench coat, and maybe some clown shoes (I don't know why), and hit up a few hardware stores and pilfer bits of their paint chip stock to make my house look cute and festive.

If I get arrested, I'm going to rely on everyone on Pinterest to bail me out and/or defend me if the cops plant other free samples on me. "I've never touched those Costco meatballs! Attica! Attica!" 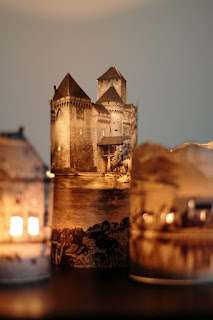 Another simple idea to spook up the place (besides murdering a family of four and burying them beneath the floorboards; don't do that. CRAIG.) is to print tiny black and white or sepia-toned spooky houses, cut them out, and wrap them around electric tealights. You could probably do other scenes beyond creepy castles and macabre McDonald's, but that's up to you.

This is one of those ideas so cheap and easy that, as a cheap and easy woman, I can really appreciate it. It's cute, simple, and wouldn't take much time. The tutorial suggests using an exacto knife, but I'm sure scissors would be easier and safer. You could probably relegate the task of cutting out the scenes to children, even! All the neighborhood tweens! Set up a whole sweatshop of overworked, crying children and give them scissors, tape, and no lights. Don't waste your tealight batteries on the kids. They'll be fine crying into the darkness with sharp objects, trust me. 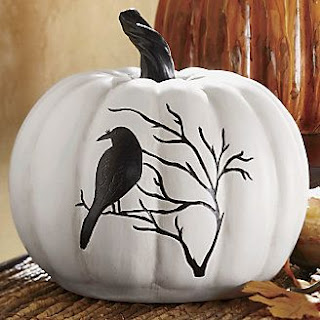 These days fake pumpkins are all over the place (seriously; check your walk-in humidor, it's lousy with fake pumpkins), which is good for those of us who love Halloween and love decorating pumpkins but don't want to dig into pumpkin guts a whole bunch every year.

Instead, you can get a plastic pumpkin from Target or something, paint it white, and stencil or freehand on a nice, seasonal design. It doesn't have to be a crow perched on a branch that doesn't look like it would actually hold any weight. That part's up to you. We could revisit that whole macabre McDonald's idea if you're really stuck on it. Like, really stuck on it. So stuck on it that you just WON'T STOP BRINGING IT UP, CRAIG.

Come back tomorrow (or hang around constantly refreshing the page and crying into your sweater sleeve if you've got nothing else to do) for fashion suggestions for the fantasy bash!
decorations fantasy party halloween