on April 13, 2016
Before I get to pictures of my kitchen going through puberty, I need to tell you about how I have another Veruca and Finn story out! I have a specific naming convention for the books, and THROB fit right in. It does away with pretense (the story is half sex, after all) and makes me laugh. It's eye-catching too, don't you think? 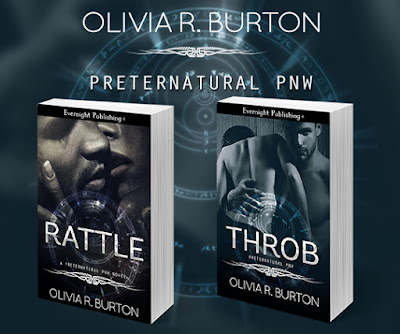 Throb is a FREE READ over at Evernight (or wherever you like to get your books), and it catches up with Finn and Veruca on Valentine's Day for a little slice of life nugget. It's funny and sweet and hopefully will entice people who are just not sure about spending $6 on a book to give Rattle a try once they finish Throb.

Speaking of which, if $6 is too rich for you, but you want to read Rattle, it's on sale at Evernight right now for half off! Seriously! You should check it out if you like fun reads.

Now onto the dirty stuff! Dusty stuff, sorry. There's been a lot of dust at home, lately.

My house was built in the early 60s, which means it's in its 50s. Granted, that does seem pretty late to be going through puberty, but houses do age slower than humans and it's going through all sorts of changes. It's losing its baby floors and cabinets are popping up in places where no cabinets lay before. It's starting to be really concerned about how its siding looks and minding being naked around the holidays.

Guys, it's time. I've had to have a talk about the beltsanders and bandsaws with my house. It was uncomfortable for both of us, but I really think the house is going to grow up into a beautiful rambler whose foundation is no longer sinking (it got braces installed under the floors where there were none) and whose roof is no longer covered with dead leaves and moss.

What I'm trying to say is, here are more pictures of my kitchen renovation! 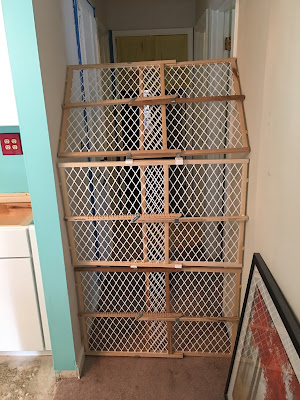 Our cats are escape artists and fixing the foundation changed the way the house is sitting, I guess, so only one of the bedroom doors will close and latch. So, instead of worrying about the cats escaping the bedrooms, we put up some baby gates to block them into the back of the house. I had to tilt the top one at a steep angle because they managed to scale them when the gates were all stacked straight atop each other. 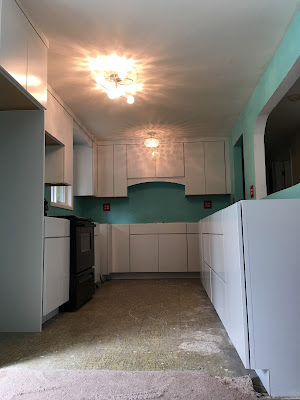 Here's the kitchen as it looks now! There's still a lot of work to be done, including putting in new floors, having the counters and major appliances installed, and putting the knobs and handles on all the cabinets. But, I've got at least some semblance of a kitchen now! I won't have a sink for two weeks so I can't really cook anything if it will require washing pots and pans, but I'm excited anyway!

Next step is putting away the kitchen debris scattered around the house. I have no idea how to organize the place yet, yikes!