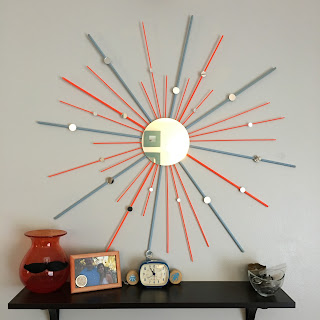 All the hard parts of my remodel are done! You wouldn't know it from the next picture, since it was before I got my microwave installed. It was, like, a 500lb microwave that needed to be attached to studs. That I didn't do on my own because I'm scared and could barely lift it, and handymen were going to charge a lot of money. I got a friend from work to help me for the cost of a beer instead. Huzzah!

I've got new floors through the public areas of the house, I have a kitchen again, I have a dishwasher, I have a living room, and the tree that was destroying my roof slowly and with great malice (I'm just assuming; the tree and I never had words) is gone!
The first six months of my self-proclaimed Year of the Phoenix have been a pain in the ass. I started the year with all these goals that I've only sort of accomplished, and I'm pretty frustrated with myself for being so far behind where I wanted to be at this almost-halfway point of 2016. I haven't lost any weight (and, in fact, have gotten fatter, ugh), I've only just now gotten to republishing Gwen, and I don't feel as if I'm really improved myself at all.
What has improved, though, is my house. The problems I had with it before, both big and small, have mostly been solved! There are still some problems that will probably never go away, but I've got working kitchen drawers, the back of the house is no longer sinking, my roof is no longer in danger of getting murdered by falling leaves, and I have "wooden" (laminate) floors that are easier to keep clean than the old carpet. Also, they make for hilarious cat-skidding entertainment!

Next up is to work on my weight, and on getting Business With Pleasure out there so I can start looking toward getting Cold Feet, Gwen #3, out as well! I'll have to look into promoting myself so people actually BUY the series, but that's fodder for another post. Wish me luck!
cats decorations Gwen Arthur home life house puberty kitchen renovation Mixed Feelings pets PPNW remodel remodeling self-publishing year of the phoenix