on October 06, 2016
I'm so far behind, guys. I never really know what to blog about in the first place, but it's been extra hard to blog because I spent almost two weeks in Italy and working up to that took a lot of brainpower. I'm not even sure how, since I really just had to pack and clean the house, but it was like, "hey, I have two months before I go to--wait, what? I leave tomorrow? *silent screams of stress*"

BUT ITALY! It was pretty great. Not so much Rome, which was dirty and stuffed with a line of people trying to aggressively sell me bootleg water and random old ladies trying to touch my face in the hopes I would buy their rosaries or whatever, but southern Italy was pretty spectacular.

I went on a vegan tour with twenty-three other people and it was amazing and soul-soothing and stomach-expanding. Seriously, vegans can eat a lot on our own but you add Italian food--which seems to be based around making you super full in the first place--into the mix and you end up with me gaining 10lbs in ten days.


We started off in Bari, having lunch at a cute restaurant and then getting a tour of the historic part of the city, which was lovely.


This graffiti found in the twisty, narrow streets was one of my favorite finds of the whole trip. 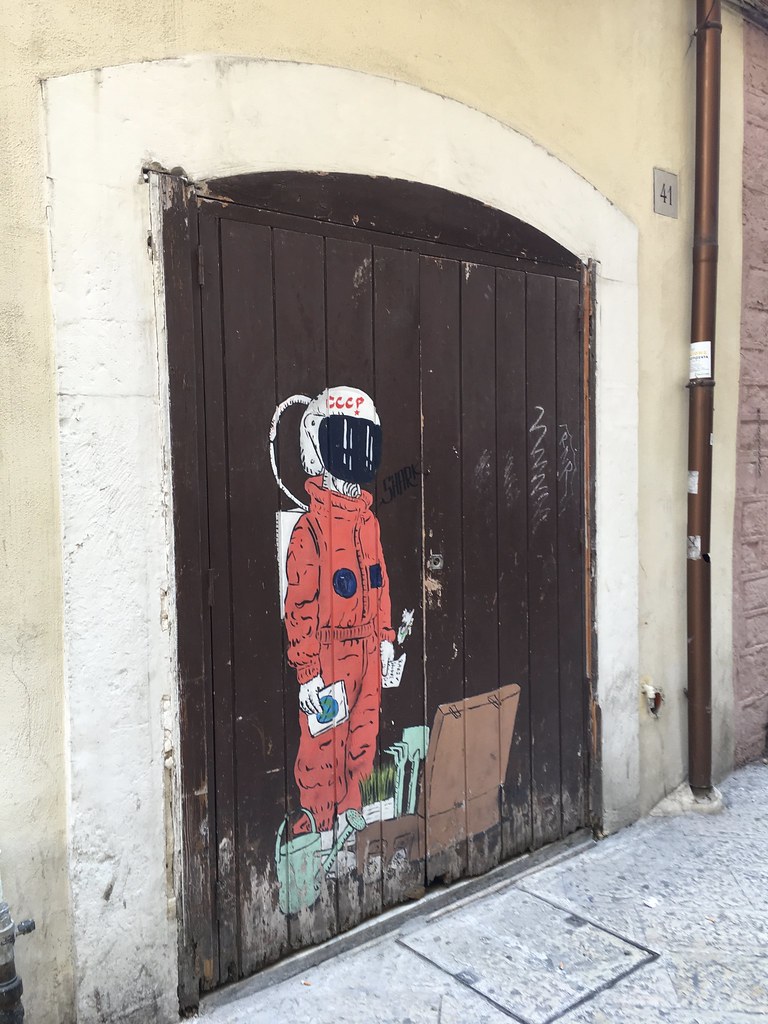 I'm still not sure if he's an astronaut or just a gardener in a protective suit, but I'm with it either way.

After that we made our way to Matera, the oldest living city in the world. It was initially settled 10,000 years ago by people living in the natural caves in the site of the mountain, surviving off the river that slowly carved its way through a ravine. 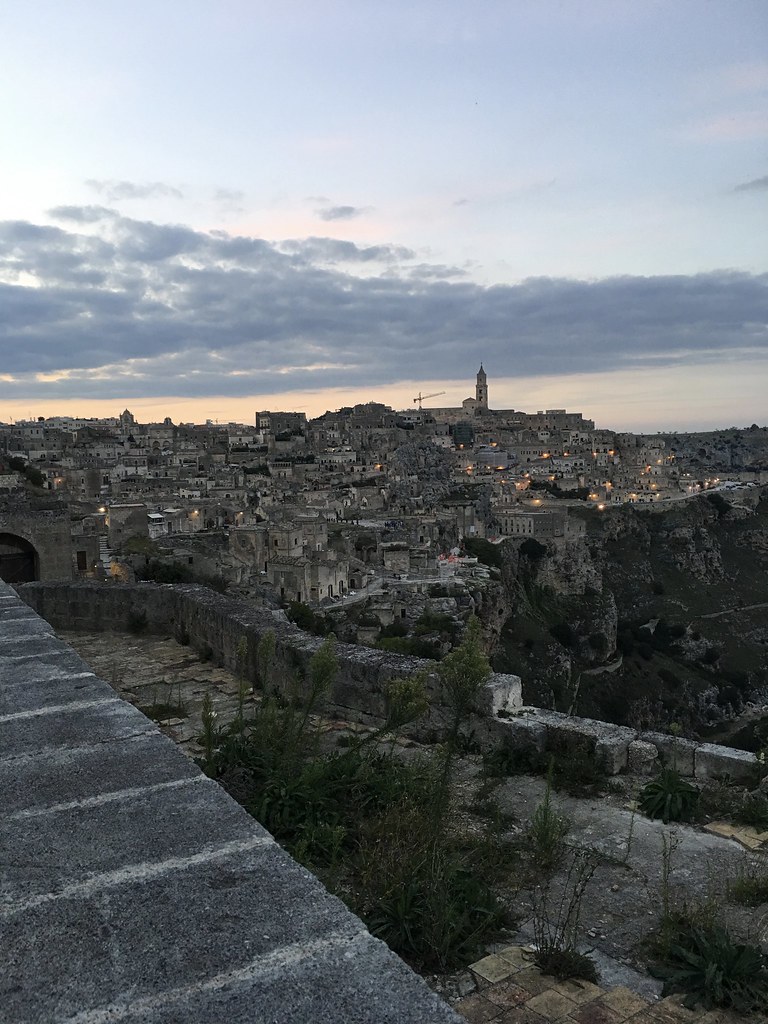 From there, people moved on to carving out their own homes across the river, creating cisterns for storing rain water and living ~ten humans and a donkey to every one-room home. They lived mostly the same for thousands of years until they were forcibly removed by the Italian government in the '50s, their homes barred up so they couldn't sneak back in during the night. 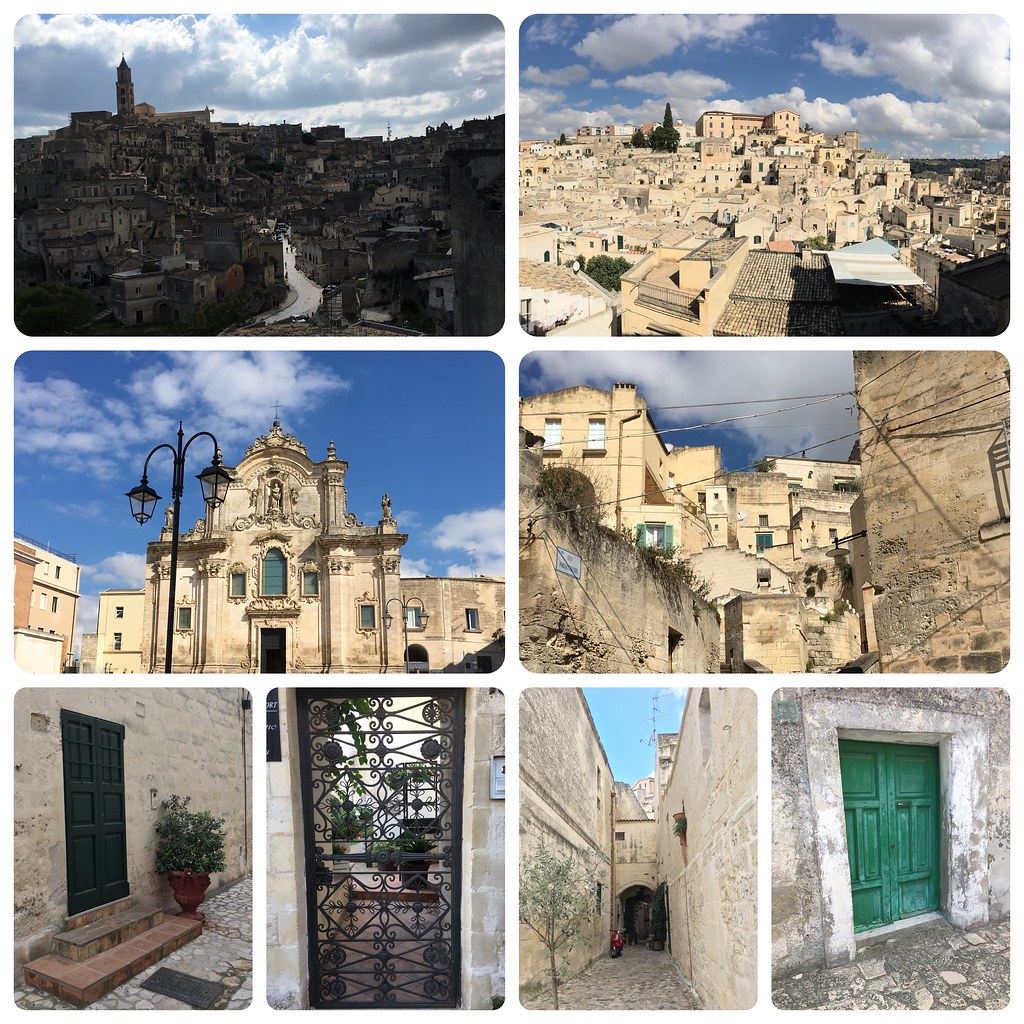 The Italian government has since realized what an important, historic site Matera is and worked with other European countries to get money into revitalizing the place and making it livable again. Many of the dwellings are still unlivable, but if you're looking for an investment opportunity you can lease a cave dwelling rent-free for 90 years as long as you're willing to restore it! Such a deal!


I stayed in a small cave hotel room myself (seriously, the free floor space would have just fit a yoga mat) but it was such a unique experience I didn't even mind realizing that first night that I had become my mother.


Matera was one of the most incredible places I've ever been. I can't even fully explain what I loved about it, but it was just such an interesting place to wander around and get lost. The architecture was amazing and there were cats everywhere. Magical cats who gave no shits about the laws of physics.


From Matera we moved on for a day in Alberobello, a city full of huts with pointed rooftops that I didn't get a picture of because KITTIES!

Alberobello was a pretty neat place, even though we only stayed there for a few hours (and most of those hours were spent eating, of course).


The trulli huts are reportedly built with their domed, pointed roofs so that when the tax collector would come a'calling, demanding money for any residence, they could pull one of the rocks out, collapse the roof into the center of the home (presumably from the outside, or it would be so tragic every time the taxman came), and run to hide in the olive trees. Literally in the trees, the story goes!

After Alberobello we moved on to our spectacular hotel, Borgo San Marco. San Marco is a Masseria, which was basically the big house in which a wealthy land owner lived. My room was ridiculous, the property was idyllic, and the olive tree groves were filled with bugs. I got absolutely eaten alive after one walk through the area and had to basically hook of an IV of Benadryl for the rest of the week to tolerate the itching.


Over the course of the trip we got bread-making lessons from a third-generation bread maker, visited a winery, learned how olive oil is pressed, learned how to cook from actual Italian mamas, and got several cooking demos from the vegan queen herself, Miyoko Schinner!


It was a pretty spectacular trip and I feel pretty lucky to have been able to afford to go. I can't afford anything anymore, but at least I got to see Italy! I absolutely want to visit southern Italy again and get to even more towns with historic centers so I can explore them all.

Rome was worth visiting, even though it was so busy and dirty. The Colosseum is the only monument I've seen that really was as impressive as I thought it would be. I loved every monument in DC, of course, but somehow they all seemed smaller than I thought they would be. The Colosseum was exactly as it should be and I did really enjoy walking by it any chance I got.