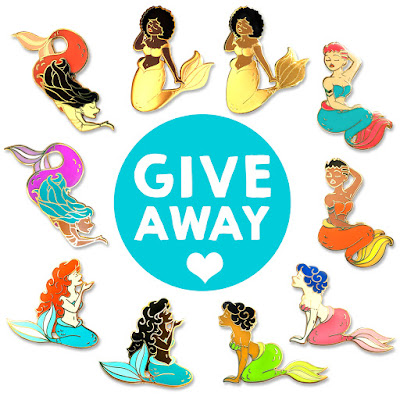 A few months ago I stumbled on the trend of pin collecting and I've been mildly obsessed ever since. I can't afford to participate more than as a spectator most of the time, but I still follow a lot of pin collectors on Instagram just because I love to see what they've come up with.

Also, so I have a steady stream of fodder for my PIN-terest board.

The night of the election, many of the pin collectors I follow expressed great sadness and anger and fear and all sorts of other unpleasant emotions. Like me, they were pretty surprised that America decided to put a yam in the white house. The next day, however, many of them decided to stand up and do something about it. Their dedication and eagerness to put goodness out in the world was part of what inspired my post from Thursday about how regular, every day people can fight injustice and stand up for what they believe in.

It also inspired me to message one of my favorite pin makers, Oh Plesiosaur (The only one I've bought multiple pins from, actually!) to see if I could donate an extra set of the mermaid pins she's been donating on as a giveaway. I'd seen many people comment on her donation promotion posts saying that they wish they could help, that they wish they could buy, that they wish they had the money to donate themselves, but that they just weren't in a position to do so. Since I have a little extra money here and there (not really; my financial karma has been shit the last few months! But I like to pretend.) I wanted to give her a chance to make someone's day.

The first part of the year had been mostly pretty good to me. I got some money from my dad's passing and it allowed me to take a friend on a trip, help another friend out with medical bills, get some much needed fixes done on my house (the back of the house was literally sinking, you guys!), and generally not worry TOO much about money. Well, the last few months have been trying to kick me straight in the teeth and it's getting pretty frustrating. I'm worried I'm going to end the year in the same crappy, stressed, overweight position I have for the last few years and I really hate that.


Prepare for some hippie nonsense ahead!

That being said, I don't think the answer to any of life's teeth-kicks is to pout and complain and sit around and sulk until you melt into a puddle of goo. I think it's always best to try to change your situation rather than just cry over it. Another important part of life, though, is hope. Hope that things will get better for you, for those you care about, for strangers you empathize with, for anyone who deserves it. I've honestly found that my Depression kicks up when I'm out of hope. When I can't see a way forward and can't see anything worth looking forward to or working toward. Hope is essential, people. I think the world needs hope and I wanted to help with that.

So, when I messaged Serena and asked if I could donate some extra pins as a giveaway, I was mainly hoping that at least I could give hope to someone else out there and maybe inspire others who have some extra cash to do the same.

Serena made the whole idea even better, though, by offering to MATCH the amount of pins I donated (meaning even more people get to win something!), and coming up with the idea of posting a giveaway that really focused on goodness and happiness. The whole shebang revolves around compliments!

Amazing, right!? Check out the details on her instagram:

Surprise! It's a mermaid pin giveaway! My buddy @naeko has generously donated 4 pins and I've matched it with 4 additional pins, which means we're giving away 8 mermaid pins in total!

This giveaway's a little different from ones I've done in the past. You'll be nominating a friend to win, not yourself. Here are the rules:
1. Nominate a friend to win a pin! Tag someone you love in the comments and tell me what you admire about them, which mermaid pin you think they'd like, and anything else you'd like to share.

That's it! It's been a rough week-- let's raise each other up and share the love!

The fine print: Eight winners will be announced on Friday, November 18. By entering this giveaway, users release Instagram from all responsibility and acknowledge that this giveaway is in no way sponsored by Instagram. Giveaway is open to both US and international entries.

The giveaway began at 4:30pm EST today, and you can enter a friend to win by heading to her post about the whole thing and leaving a comment.

I'm so excited to be a part of this! I'm so happy to be giving people who can't afford these cute, queer mermaid pins a chance to win them but also to give a bunch of people a chance to hear/read nice things said/written about them. Who doesn't love to be complimented, right? (okay, lots of people get uncomfortable with compliments, I get that too, but just take it, okay. SOMETIMES COMPLIMENTS ARE ABOUT ME  FEELING GOOD FOR SAYING THEM NOT ABOUT YOU, HAROLD!*)

Like I said above, I also hope others are inspired to take part in this sort of thing! It would be so nifty if we could get a whole bunch of people donating something (Not necessarily pins; it could be patches or posters or perfumes or whatever) to be given away. We could all float through life on a steady stream of compliments, pleasantries, and feel-good phrases. Let's lift each other up and celebrate kindness instead of bashing and complaining about the world, right?


*I have no idea who Harold is, I just feel like he would get snippy if I told him** his vest looks nice or something.

**I'm joking about complimenting others solely to make myself feel good, don't worry