How to handle a cold without dying

on November 22, 2016
I got sick a few weeks ago. It was probably my fault for going to a big ol' nerd convention (the Portland Retro Game Expo), though my doctor blames being allergic to my job. Last time I went to a con (Pax 2015) I got pretty sick afterward too, so now I know I'm just allergic to video games. I thought that since I came back from Italy without any cold or flu that I was off scot-free! I was wrong.

It started mildly with a sore throat that I tried to handle with the last dregs of cough medicine, which was a mistake. I got pretty stoned and I'm surprised I was able to do my work at all. My brain was fried for most of my shift on what seemed like half a teaspoon of cough medicine. Maybe it was that I took it on an empty stomach or maybe it was that I was already running such a fever that I couldn't stop shivering. It was so bad.

My salvation, however, was staying home for a few days, cleaning out my sinuses, and making sure I had plenty of tissue to handle my never-ending runny nose. I figure, since I have tips on colds, why not share them? They seem to have helped me both this time and the last time I got sick, so maybe they can help you too!

But if your boss asks, you're still super sick even after trying these excellent recovery methods and you need to stay home because cough cough cough.

Tip 1: Get a neti pot and use it several times a day 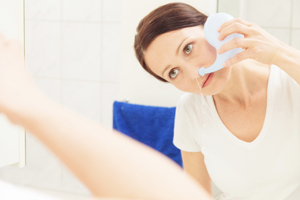 Neti pots can be a total nightmare if you're not stuffy. I'm not really sure why, but even if I use them with just water and no salt/saline solution it hurts like I'm pouring chunky acid into my sinuses. When I'm stuffy, though, it can be a religious experience. It may take a bit to get the solution through the blockages in your poor, flu-ridden face but once the warmth of the water and the intensity of the salt really start to work, it's the best feeling. You unblock your nose, you breathe clearly, it can help with sinus pressure headaches, and overall I think it must help you to get better quicker. I know I feel better emptying out my sinuses rather than just letting all the gunk my body is generating sit there, packed and waiting to be blown out.

I always make sure to close my throat when I'm running the stuff through my nose, because I want my nose to clear first, but you can just spit out anything that flows down. Now, 95% of the time my nose stuffs right back up immediately, but I still consider it a worthwhile chore. I do it six or seven times a day (though, not with the salt every time, just with slightly-too-warm water to clear things out), any time I'm really suffering because it makes me feel better. You know that feeling when you're really sick and you take a hot shower and at the end you're kind of convinced that you're totally cured and you can go take the Bar exam and pass with flying colors even though you've never even seen a lawyer outside of some greaseball in a boxy gray suit in some crappy 80s movie? That's how using a neti pot feels to me when I'm really sick.

Tip 2: Mouthwash the hell out of your mouth
Your mouth is a festering cave of bacteria goblins and rotting food nuggets on your best day. Throw in a virus and the fact that you're probably spending all your time spread uncomfortably over your couch coughing and wheezing and that means your mouth (not to mention your breath) is probably ten times as vile. I gargle and rinse with mouthwash at least once a day when I'm sick. Sometimes the intensity of it can help clear my nose a little bit, too. Plus, when you're choked with something that's killing your immune system, it can't hurt to take out whatever crud is making you sick in the first place, even if you're just fighting whatever parts of it are living in your mouth.

Everyone gets that stupid never-ending cough after they're sick, the one that doesn't go away for 6-8 weeks and makes every person in the general vicinity cringe and reach for the hand sanitizer as soon as they hear it. I've still got mine and it's driving me bananas. It's not as bad as it could be, though, and I think that's because when I'm sick, I do my best to find the proper angle for sleeping that will let my sinuses or throat or whatever open up enough that I can breathe through my nose. I usually neti pot my head clear, gargle my mouthwash, and then try to sleep propped up slightly so that I can breathe through my nose.

I was noticing that my coughs were bad after being sick, even if the cold/flu didn't start with any sort of sore throat. Usually around the second or third day, my throat would be so raw that I could barely talk, breathing made me cough until I felt like I was dying. Then I realized it was probably because I was spending so much time dying with my mouth hanging open just so I could breathe, which was likely making my throat dry out.So, now I do my best to find a position to sleep in that allows me to keep my mouth closed. Barring that, I'll sleep with my blanket covering my mouth since breathing into the cloth makes me feel like my throat's getting less arid.

Tip 4: Keep a lip balm for your nose

I have a dedicated lip balm for my nose that I usually have on my bed shelf since I have a lot of allergy issues and end up blowing my nose constantly. This gets way worse when I'm sick and blowing my nose a hundred times a day. Naturally everything gets raw and sore and red. So, I combat that by applying the lip balm (I use an unscented, raw, coconut oil balm) to my nose almost every time I blow my nose. I get it all up on my nostrils, even poking it in as far as I can and sometimes smearing some on my finger to get it on the inside walls of my nose if the septum has really gotten irritated as well. It helps A LOT and makes my nose hurt so much less.

Past those, I can only really off the usual tips for when you're sick: keep hydrated, sleep a lot, don't run for Governor. Hopefully you don't get ill at all this winter, but if you do, try out my tips!

Also, in the spirit of not getting sick, don't forget that today is Clean Out Your Refrigerator day!

I'm all about neatness and keeping clean, so I'll probably go home and toss that jar of salsa my roommate stuck in the fridge door in roughly 1931 and hope that it's not too fungal to safely dispose of in the trash.
cold dry nose flu help hurraw illness mouthwash neti pot sick tips