on March 12, 2017
It's Sunday Check-in time! We'll see how I'm doing, how Leanne's doing, and how Naomi's doing giving up her one true love: 🍫 chocolate.  I went to a chocolate factory tour this week, so hopefully my pictures of a chocolate pipeline didn't tempt her and ruin her month! 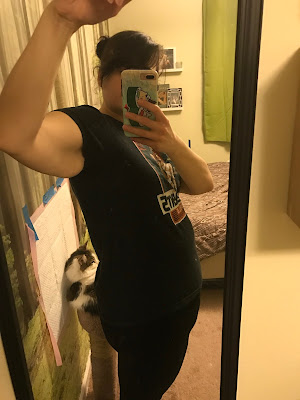 
I've slept and eaten so poorly this week. The roommate had heart surgery and his mom was here, which means I was taking care of him and entertaining company, so I definitely wasn't my best self in terms of eating or exercise. I also had split days off, which ruined my sleep schedule too. I did do some form of exercise every day, though! Even if it was just easy yoga or an easy walk, I fulfilled my goal!

Doesn't look like it's done any good, but at least I can say I've done it!

Well! I thought this week has been a bust. I've been busy ransacking my home, destroying furniture and generally not working out as such, but I got on the scales this morning and I am now 301.6lbs- which means I lost 2lbs this week! 2 FREAKING POUNDS!

I reckon this has more to do with earning at proper times, drinking more water and sleeping better and more regularly.

I have a lot going on this week, so we'll see how it goes, but I have recommitted myself (and the other half) to going to the gym every day next week. It's open 24hrs so really there's no excuse. Here's to another 2lbs or more next week!

Day 12 of my Dechox for the British Heart Foundation and I'm happy to report that all is going well! It's been so much easier than I expected, which almost makes me feel bad in a way, like I'm not really earning my sponsorship money if it isn't a struggle. Do I miss chocolate? Yes, definitely! Especially because those delicious Lindt eggs are everywhere at the moment and I cannot tell you how much I love them. But am I having to force myself not to eat it? Nah. I'm just...not eating it.

I guess this is good, because it means what I always thought of as a bit of an addiction is really just habit and impulse. But then I feel weird when people say that they really admire what I'm doing, because obviously giving up chocolate for a few weeks is nothing compared to what some people do for charity.

I am still having some mental debates over whether chocolate tea counts. I have an amazing Red Velvet tea from Bluebird Tea Co that I thought was a perfect sweet substitute for chocolate in general, but I realised the other day it has chocolate sprinkles in it. Does that count? I mean, I'm not actually eating any chocolate there, right? I'm probably wasting way too much mental energy on that one.

Anyway, the bottom line is, we're twelve days in and everything is fine! Only nineteen days to go before I can dig into those Lindt eggs...
Be sure to support Naomi in her Dechox endeavor, as it's going to a good cause!

What is DECHOX?
DECHOX is a nationwide sponsored challenge to give up chocolate for March and raise money for life saving heart research.
Any sort of cocoa is a no-no, which means chocolate bars, sweets, treats, biscuits, ice cream, cake – and even the chocolate sprinkles on your cappuccino – are off limits during March.
Over the last two years, nearly 40,000 people have taken on the challenge to chuck the choc and raise money to fund our world class researchers. You really are a nation of true chocoholics and so DECHOX 2017 promises to be even bigger and better.
So, if you’ve ever found yourself sneaking a cheeky chocolate bar after the gym or digging into your desk drawer for an afternoon cupcake, then now’s the time to test your willpower, have fun and feel good in the process.
And if chocolate isn’t your thing, why not give up something else or challenge yourself to take on an ultimate DECHOX – not only is chocolate off limits, but all sweet treats are too!
Chocs Away!